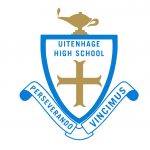 The school had a very painful birth. It was established in 1964, on a small, undeveloped piece of land. The building was only ready for occupation during the second quarter of that year, albeit with used and inadequate furniture, sourced from surrounding schools.

Undeterred by the initial problems, the staff set out to mould the school into an effective educational institution.  It was not long before the school made its presence felt. Its first Senior Certificate result in 1965 was excellent and set the standard for those who followed. Soon the school’s hinterland extended into all corners of the country, resulting in a rapid growth in enrolment.

A solid foundation was laid.  For many years it had a 100% matric pass rate with some of the pupils gaining 1stposition nationally and others reaching the top 10. The school not only played a pivotal role in the academic preparation of its pupils, but also had a wide-ranging sports programme including athletics, swimming and a variety of team sports, with many pupils gaining provincial and national colours.

The sports facilities at the school are grossly inadequate. In order to give the pupils the benefit of organised sport, the school played a major part in the establishment of the Uitenhage Sports Board (USB). Under the direction of the USB, our pupils, together with pupils from other schools in the area, planted the grass at the Jubilee Park Sports Fields – a lasting legacy.

We pay homage to our first principal, Mr HCC Hendricks, and his team of pioneers. Their unwavering commitment laid the foundation for this institution to become a beacon of hope to the entire disadvantaged community of Uitenhage. In 2013 the Nelson Mandela University awarded Mr Hendricks an honorary doctorate (posthumously) in recognition of his substantial contribution to education.

There was a time when the non-appointment of a permanent principal and senior staff members created a period of instability at the school. The role of the parents and the wider community in applying pressure on the department to make the necessary appointments definitely had a positive effect on the school.

The school continues to produce good results. Over the years the school’s immense contribution in many spheres (academic, sport, culture, etc.) has been acknowledged and rewarded by various esteemed institutions.

The school’s alumni association, the Uitenhage High School Past Pupils and Teachers Association (UHPPTA), was established in 2010. Since then it has awarded bursaries totalling hundreds of thousands of rands to deserving, needy pupils to further their education.  Another of UHPPTA’s major objectives is to erect a multi-purpose school hall. Good progress has been made in this regard.

In 2014 the school celebrated its 50thAnniversary through a series of well-organised, successful functions.

Uitenhage High School is still regarded as an institution of excellence today.

Our school was and still is, blessed with competent, dedicated teachers who play a major role in the lives of their pupils. Many of their products occupy key positions in South Africa and abroad today due to the unselfish commitment of these teachers.